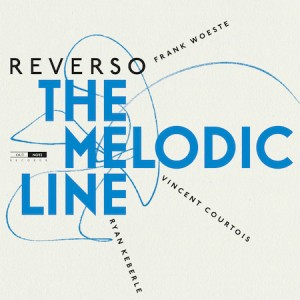 Trombonist Ryan Keberle and pianist Frank Woeste team up again as Reverso, joined on their second album by cellist Vincent Courtois. Keberle and Woeste initially came together to explore their deep training in both jazz and classical idioms. But the pair wisely avoid the hybrid high modernism that informed the Third Stream movement of the 1950s. Instead, they turn to early 20th-century French composers Les Six, whose works drew on jazz, cabaret music and other forms of then-contemporary popular culture.

The trio’s engaging treatment of that work brings to mind what it might have sounded like had Les Six been afforded the opportunity to delve further into the Afro-diasporic musical logics that informed popular jazz at the time, rather than simply imitating it. Pieces on The Melodic Line evidence thoughtful engagement with this repertoire, while still feeling contemporary; they go far beyond trying to make jazz sound like classical music—or vice versa. Instead, Reverso demonstrates a deep synthesis of both modes of music making, and the result is as relevant to the 2020s as Les Six were to the 1920s. From the light, upbeat grooves on “Blue Feather” and “Absinthe” to the heartfelt expressivity of “Exemplar” and “Clara,” the nuances of both the chamber ensemble and the jazz trio are brought into an engaging and creative soundscape.

It helps that all three players here are masters of their respective instruments—each summoning a confident virtuosity for their performances that seems honest and unpretentious. The result is a fresh reminder that beautiful possibilities still live at the confluence of European and African musical thought.