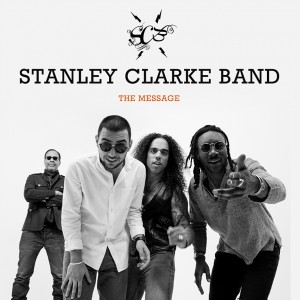 With the recent prominence of artists from the West Coast Get Down, it’s fascinating to hear bassist Stanley Clarke channel various facets of his pioneering work in jazz-fusion from the past four decades to create something remarkably contemporary on The Message.

Add a few “meow meows” and some daffy love lyrics on “The Rugged Truth,” and the song could pass as a new Thundercat tune, particularly in how Clarke plucks out those patented tumbling notes during his rapid-fire solo.

It seems as if the resemblance is no coincidence, given that WCGD member Cameron Graves contributes synthesizer to Clarke’s new combo. With the age difference between the bassist and the rest of his core band, the ensemble here could have been billed as “(Grand) Children of Forever.” Although each member shares composing duties throughout The Message, it’s evident that all the material pays homage to Clarke’s glorious past. The opening cut, “And Ya Know We’re Missing You,” Clarke’s duet with hip-hop veteran Doug E. Fresh, is a throwback to 1979’s “I Want To Play For You” and 1988’s “If This Bass Could Only Talk,” Clarke’s collaboration with tap dancer Gregory Hines.

More quintessential than essential, The Message is a compelling survey of Clarke’s expansive musicality as he refurbishes multiple touchstones.