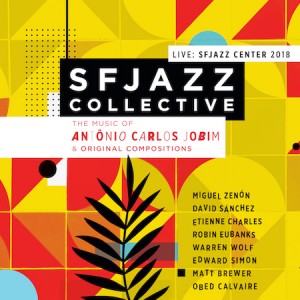 This double album suffers from a surfeit of riches. It’s somehow meant to represent the SFJAZZ brand, waving the organization’s aesthetic flag as the Lincoln Center Jazz Orchestra does Jazz at Lincoln Center’s. Such circumstances are demanding, but the challenge is met.

Alto saxophonist Miguel Zenón, whose phrases cut with a honed edge, is featured plenty in his final outing with the collective he helped launch in 2004, but so are all seven other members, each with spotlit bits that utilize their distinctions. The ensemble readings of Antônio Carlos Jobim’s memorable melodies are virtuosic, as are soli and intergroup interactions. Still, as a continuous listening experience it’s a bit much. The 20 tracks run more than two hours, with the whole cast almost always fully engaged. Reflection or repose are rare, new ideas proliferate and focus is diffuse. Treating “Waters Of March” with Cuban chanting and percussion is novel, but does it serve the song? “One Note Samba” is stress-tested by the arrangement’s polyphonic and rhythmic deconstruction, but to what end?

By definition, SFJAZZ Collective is a show band. It projects high performance standards, as well as teamwork, promoting personal ambitions, as well as pan-cultural inclusion. The performances are thrilling, but as a recording, it might be best appreciated a few tracks at a time.