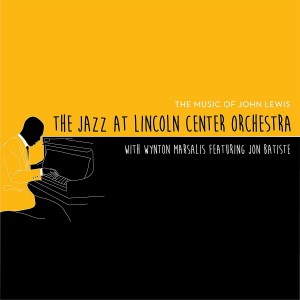 The latest release on Blue Engine, the Jazz at Lincoln Center Orchestra imprint, is devoted to interpretations of nine pieces by pianist-composer John Lewis, performed at a January 2013 concert devoted to the respective oeuvres of Lewis (1920–2001) and Gerry Mulligan (1927–’96), whose paths first crossed in 1948, when Miles Davis was putting together his iconic Birth Of The Cool project.

The curator of the concert contained herein is Jonathan Batiste, then a 26-year-old rising star who shares with those dedicatees a penchant for rendering “high culture” concepts with a “university of the streets” attitude. The program mirrors much of a 2001 concert on which Lewis conducted and played piano with the orchestra in a program consisting entirely of his own works.

Batiste stamps the repertoire with his own forceful tonal personality, most fully displaying his interpretive skills on “La Cantatrice,” ‘Piazza Navona,” “Pulcinella” and “Spanish Steps” from Lewis’ extended 1960 suite, The Comedy. On “Django,” he follows Lewis’s example with an unaccompanied solo; where Lewis was epigrammatic and trim, he’s florid and overtly virtuosic, showcasing his own New Orleans-centric dialogue between the Euroclassical canon and the blues that marked much of Lewis’ oeuvre.

The date is a tour de force; it’s to be hoped that Batiste will continue to present his abilities as a hardcore jazz voice to his now exponentially expanded fan base.