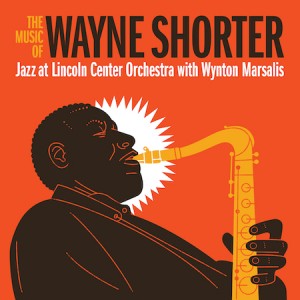 When Jazz At Lincoln Center established its own orchestra in 1988, part of the idea was to showcase the repertoire of jazz greats. At first, the emphasis was on giants of the past, but with The Music Of Wayne Shorter, recorded live in 2015, the group not only salutes jazz’s greatest living composer, but includes him as featured soloist.

These aren’t his arrangements, however. Instead, each was written by a JLCO member, and colored as much by the band’s aesthetic as by Shorter’s melodic and harmonic signature. As such, the collaboration tilts toward the post-bop aspect of Shorter’s oeuvre. Six of its 10 tunes originally were recorded for Blue Note, with two dating to his tenure with Art Blakey’s Jazz Messengers. We do get versions of “Endangered Species” and “The Three Marias,” both from Shorter’s 1985 fusion effort Atlantis. There’s just nothing from his time with Miles Davis or Weather Report. In fact, the album closes with “Mama G,” a hard-bopper cut by the Wynton Kelly Quintet when Shorter was 26. Its original incarnation was raucous and bluesy with a surprising harmonic twist in the “B” section. Chris Crenshaw’s arrangement, however, mostly emphasizes the minor-key groove of the “A” section, an approach that suits JLCO soloists, but doesn’t encourage Shorter to shine. You can’t blame the band for wanting to strut its stuff in front of the master, and the obvious affection JLCO holds for Shorter and his music ultimately carries the day.