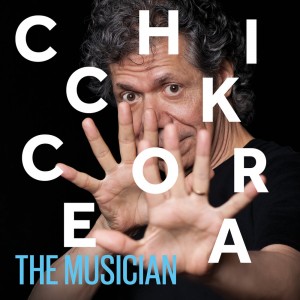 Chick Corea is a pianist virtually without peer. From all evidence on The Musician, his 2011 month-long stand at New York’s Blue Note club for his 70th birthday—during which he played in 10 settings reflecting collaborations and interests threading through his 55-year career—was a creative revelry every night.

This deluxe documentation of Corea’s historic stand—three-and-a-half hours of music over three albums, an essay by Thelonious Monk biographer Robin D.G. Kelley, a gallery of Ernest Gregory photos and a 96-minute Blu-ray documentary film—is paradoxically a substantive feast that might leave listeners wishing it were just a little less, and craving more.

“Captain Marvel,” Corea’s melodic title track for Stan Getz’s 1974 album, is a welcome opener here on which the pianist stretches with the expansive buoyancy and organic flow of his finest acoustic work. Continuing with “Light As A Feather,” bassist Stanley Clarke and drummer Lenny White sound up-to-date and hard-hitting, with Frank Gambale (from the Elektrik Band on disc three) fitting well into this “Return To Forever Unplugged.”

Corea’s trio with drummer Brian Blade (using brushes) and perfectly propulsive bassist Gary Peacock is under-represented by the lovely “I Hear A Rhapsody,” but the rangy Five Peace Band, co-led by Corea’s longtime friend John McLaughlin, gets almost half an hour for two pieces. And Bobby McFerrin, warmly spontaneous (if intonationally casual), sings for a full 15 minutes. Each of the three discs is a concert in itself.

On disc two, Corea’s “Overture” for himself, Gary Burton and string quartet is deftly drawn and played. Gayle Moran’s paean of wifely devotion is heartfelt, and the two Miles Davis covers are tart and taut, thanks to the excellent Wallace Roney, Gary Bartz, Eddie Gomez and Jack DeJohnette. The surprise is Corea’s Flamenco Heart ensemble—he solos magnificently on “Zyryab,” unspooling a solo that wants never to end.

On the third album, Corea’s piano mastery is not topped, but matched. Herbie Hancock and Marcus Roberts have skills and sensibilities comparable to Corea’s (we have today an astonishing array of dazzling pianists, many influenced by him). Fourhanded with Roberts, Corea assays some classic blues (Wynton Marsalis tips his hat), and with Hancock flirts with funk while sustaining sophistication. If all this feels like an appetizer, take heart: In 2016 Corea enjoyed an eight-week-long, 75th-birthday residency at the Blue Note, with even more star collaborators. Can an album be far behind?