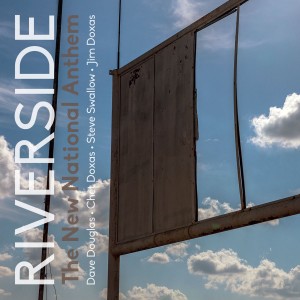 Riverside is not a tribute band in the standard sense. Although each of the group’s albums has been dedicated to a specific jazz great—Jimmy Giuffre in the case of the quartet’s debut, Carla Bley here—they don’t do so by re-recording familiar repertoire. In fact, only three of Bley’s compositions turn up on The New National Anthem, and nothing as obvious as, say, “Ida Lupino” or “Wrong Key Donkey.” (Riverside featured only one tune by Giuffre.)

And yet, the album conveys the plain-spoken tunefulness of Bley’s writing so vividly that a listener could be forgiven for assuming the album is mostly her work. Some of that seems intentional, like the way “King Conlon,” Dave Douglas’ tribute to piano avant-gardist Conlon Nancarrow, seems to echo the phraseology of Bley’s “King Korn.” But for the most part, what Douglas and co-leading reedist Chet Doxas are after isn’t emulation so much as mastering the musical grammar of Bley’s writing and incorporating it into their own expression. Hence Douglas’ “Il Sentiero,” a droll take on cowboy balladry that not only tweaks genre expectations the way Bley would have, but ends with a lively Italianate two-step—just the sort of twist we’d expect of Bley.

It can’t hurt that Riverside’s bassist is Bley’s partner and long-time collaborator Steve Swallow, who played with Gary Burton on the original version of the title track (from A Genuine Tong Funeral), as well as on Paul Bley’s 1963 recording of “King Korn.” His role here remains sedulously supportive, deftly grounding the harmony while maintaining the sort of unobtrusive time that affords drummer Jim Doxas plenty of room for rhythmic elaboration.