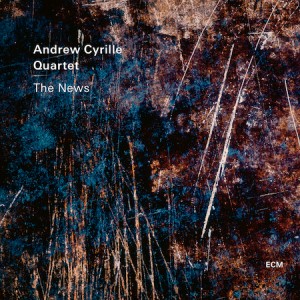 Andrew Cyrille continues to produce compelling music with the release of a new quartet outing that further cements his legacy as a premier force in jazz improvisation over a span of some six decades. Now 81, the veteran drummer made a brilliant move in calling upon pianist/synth player David Virelles to assume the role previously occupied by his longtime friend and collaborator Richard Teitelbaum (1939–2020). The result is an ambitious follow-up to Cyrille’s 2016 quartet album The Declaration Of Musical Independence (ECM). Guitarist Bill Frisell and bassist Ben Street are back onboard and all-in for this meditative and highly satisfying session from August 2019. The News is named after a conceptual piece that Cyrille originally recorded in the late 1970s with newspapers spread out over his snare and toms, which he played using brushes. Originally a solo performance, it reappears here with Virelles, Frisell and Street conjuring a playful environment of crinkly textures and atmospheric wobble as Cyrille gleefully scratches, taps and slaps his way through the news of the day. Frisell’s composition “Mountain” opens the album, setting the tone and pace of what’s to come. You immediately feel the group’s warm, wide-open, all-enveloping instrumental sound, and the music comes across as deliberate and free, never rushed, as Cyrille gently prods and pulls the time and dynamics. Other highlights include Virelles’ watchful piece “Incienso,” which intrigues with its ambiguous harmony and hypnotizes with a slow, steady drum pulse; “Leaving East Of Java,” a composition by avant-garde pianist Adegoke Steve Colson that the quartet takes on a long, intense ride peppered with Virelles’ signature piano runs and sudden bursts of energy; and Cyrille’s poetic “With You In Mind,” a reverent ode to a loved one that glows with mellow harmony and balladic atmospherics after a heartfelt spoken introduction by the bandleader.