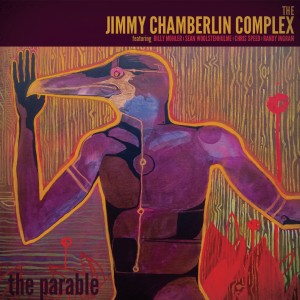 Hard-hitting drummer Jimmy Chamberlin is famous among rock fans for his years of work with the Smashing Pumpkins. Jazz fans know Chamberlin from his recent work with saxophonist Frank Catalano. And diehard fans will recall Life Begins Again, his 2005 album by The Jimmy Chamberlin Complex. Bassist Billy Mohler and guitarist Sean Woolstenhulme, who both played on that album, are back for the band’s new release, a jazz effort titled The Parable, on which they are joined by Randy Ingram (piano, Fender Rhodes) and Chris Speed (tenor sax, clarinet). Here, Chamberlin combines the energy and production values of a rock album with the spontaneity of an improvised jazz session. “Jazz really allows you to paint in real time,” Chamberlin said in the press materials for The Parable. “You’re painting first drafts and being OK with them.” This program of six tracks contains some killer “frist drafts” that succeed wonderfully. Speed, who’s certainly comfortable in an improv setting, emerges as the MVP of this session due to his inventive lines and excursions that arrive at satisfying destinations. On the title track, Chamberlin delivers compelling cymbal work (without showboating), while Ingram adds cool coloration to the sonic equivalent of an abstract painting. Speed adds poignant clarinet work to “Magick Moon,” while Mohler adds a sturdy, anchoring bass line to “El Born.” Overall, Chamberlin proves himself to be a gracious bandleader, providing a platform for his colleagues to soar.