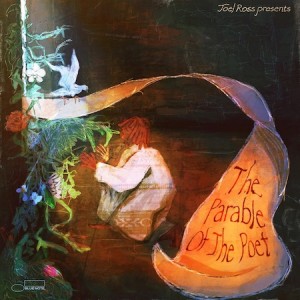 When you hear vibraphonist Joel Ross play live, what amazes is his ability to extemporize compositions as fully fledged as if he’d fussed over their design for days. A handful of these improvisations provides the seed material for the seven cuts on The Parable Of The Poet, his third Blue Note release.

The like structure of each track reflects Ross’ writing process. A spontaneous rubato section — usually solo — introduces each piece, which swells harmonically as players enter the mix. Ross throws much of the spotlight on the eight members of his Parables band through this device. On “Guilt,” bassist Rick Rosato establishes the lilt that mitigates the tune’s eventual dramatic conflict, while flutist Gabrielle Garo asserts the overarching refrain. Trumpeter Marquis Hill latches onto the dark, lumbering melody that characterizes “Choices,” before saxophonists Immanuel Wilkins and Maria Grand pile on with contrapuntal distortions. Trombonist Kalia Vandever plays a magnetic bolero for nearly half of “The Impetus (To Be And Do Better)” — one of the longest solos on the album. And drummer Craig Weinrib leads the quick, rhythmic assertion “Doxology (Hope),” the compositional prelude to Ross’ closing track, “Benediction,” a solemn hymn built on pianist Sean Mason’s pedal-driven overture.

Under Ross the bandleader, this group excels at thematic development in an improvisational setting. But it’s Ross the instrumentalist who has both the first and last word on the album. His ringing mediation on the opener, “Prayer,” sets the expectation for the deeply contemplative listening experience that follows on subsequent tracks. And his final solo on “Benediction,” brimming with complex ideas, persists unabated as the otherwise simple tune disappears in a fade.

It’s easy to hear poetry in Ross’ performances, in the strike of his mallets and the prosody of his phrasing. But like poetry, too, his music doesn’t blare its meaning. Ross wants listeners to discover it for themselves.