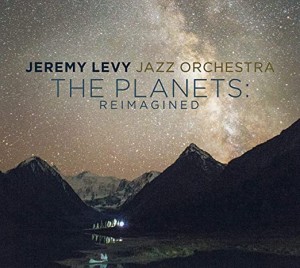 For more than 100 years, music fans have been swooning over The Planets. The first public concert of Gustav Holst’s seven-movement masterpiece occurred in 1920, when the London Symphony Orchestra performed it under the direction of conductor Albert Coates. It would become one of the most recognizable works of Western classical music, generating numerous landmark recordings, including conductor Herbert von Karajan’s version with the Vienna Philharmonic in 1961. Jeremy Levy saw the piece performed at the Hollywood Bowl in 2017 and was so moved that he crafted his own arrangement of the suite, which he has titled The Planets: Reimagined.

Listeners need not be familiar with astrology or Holst to fully enjoy Levy’s arrangement, which eschews strings in favor of standard big-band instrumentation. Drawing inspiration from the Count Basie Orchestra, the Buddy Rich Big Band and the Pat Metheny Group, Levy has delivered a thrill ride of a program, from the crashing sonic waves and Afro-Cuban flavor of “Mars: The Bringer Of War” (featuring Andy Martin’s potent trombone solo) to the muscular trumpets and kinetic, improvised piano lines in “Neptune: The Mystic.”

Whether the tracks are long (such as “Saturn: The Bringer Of Old Age,” which stretches out more than nine minutes) or short (such as “Mercury: The Winged Messenger,” which floats by in less than four minutes), Levy frequently turns a movement into a compact mini-suite, with dramatic shifts in volume and mood. On “Jupiter: The Bringer Of Jollity,” Andrew Synowiec’s gnarly rock guitar adds spice to a catchy, shape-shifting dose of big-band swing.

Over the decades, Holst’s masterpiece has inspired numerous film composers and rock bands, including Frank Zappa, King Crimson and Emerson, Lake & Palmer. And with The Planets: Reimagined, Levy has proven once again that iconic, often-heard works can inspire fresh, innovative music.