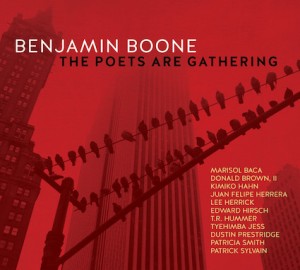 The Poets Are Gathering is Benjamin Boone’s most ambitious recording yet, one where he recruits a superb arsenal of poets who unravel their works with razor-sharp conviction and clarity. The marriage of jazz and poetry can invite as much scorn as it does celebration, perhaps stemming from spoken-word recitations overpowering middling music or accompaniment overcompensating for lackluster verses. But when deployed by Boone, the bond can be wondrous.

The saxophonist already proved his mettle through a pair of The Poetry Of Jazz albums alongside the late writer Philip Levine, where the bandleader’s compositions underscored the poetry’s emotional intent without competing for the spotlight.

The bulk of this latest album centers on the States’ legacy of racism. Following worldwide Black Lives Matter protests, one could argue that Patricia Smith’s “That’s My Son There” is critic-proof in the sense that her socially minded purpose forbids negative assessment. The works here, however, excel beyond didactic agitprop, bringing forth singular human elements that often get lost in aspirational universality. “That’s My Son There” stirs the soul as Smith gives voice to mothers who have seen their children slaughtered in sanctioned police violence. Other pieces—which address the plight of immigrants, homelessness and compassion fatigue—unfold like engrossing short films, all of which demand concentrated engagement.