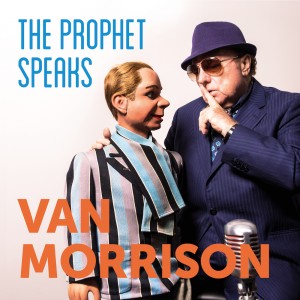 On 2018’s You’re Driving Me Crazy, Van Morrison connected with organist Joey DeFrancesco to celebrate the Great American Songbook. For The Prophet Speaks, Morrison and his crew continue to step back and cast historic blues and r&b alongside new compositions. Along the way, the bandleader retains the same spirit he had back in 1972, when he sang the praises of Jackie Wilson.

This album is more than just an upbeat nostalgia trip, though. The team digs deeply into repertoire, while Morrison’s own songwriting remains sharp. More than most rock veterans who still are global stars, Morrison knows how best to use his voice’s sublime reach. He’s at his best when creating low-key conversations on the original “Got To Go Where The Love Is.” On another Morrison original, “Ain’t Gonna Moan No More,” his subdued approach and staccato phrases provide a strong retort to DeFrancesco’s organ groove. And when Morrison summons blues shouts, they’re in all the right places.

While the bandleader continues to be an effective improviser—with nods to scatting—DeFrancesco shows off an equally strong blues feel on Sam Cooke’s “Laughin’ And Clownin’.” Guitarist Dan Wilson’s dynamics also match the leader’s, particularly on Eddie “Cleanhead” Vinson’s “Gonna Send You Back To Where I Got You From.” Wilson also adds a lyrical texture to the spiritualistic title track, which closes out the album. After swinging hard throughout The Prophet Speaks, Morrison knows that a gospel-inspired moan can say it all.

The Prophet Speaks: Gonna Send You Back To Where I Got You From; Dimples: Got To Go Where The Love Is; Laughin’ And Clownin’; 5 A.M. Greenwich Mean Time; Got To Get You Off My Mind; Teardrops; I Love The Life I Live; Worried Blues/Rollin’ And Tumblin’; Ain’t Gonna Moan No More; Love Is A Five Letter Word; Love Is Hard Work; Spirit Will Provide; The Prophet Speaks. (68:49)
Personnel: Van Morrison, vocals, alto saxophone, harmonica (14); Joey DeFrancesco, organ, keyboard, trumpet (14); Troy Roberts, acoustic bass, tenor, soprano saxophone; Dan Wilson, guitar; Michael Ode, drums; Shana Morrison, vocals (6, 13); Jim Stern, tambourine (6).