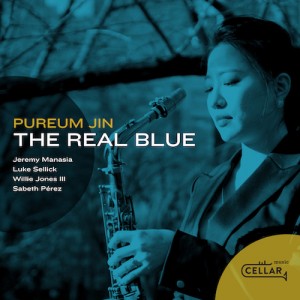 A few years back, a lot of young European players seemed to be channeling Phil Woods. You don’t often hear that tight, controlled wail any more. Pureum Jin, though, pops up with her first album and the impression is strong. Like Woods in his early years, she’s one of those players who sounds like she was never a beginner, already having found her tone, speed of execution and a generously filled ideas bag. Not many young players can put out an hour of top-tier material without filler.

The originals predominate, and an opening pair, “Trembling Forward” and “Ah-Oh-Owa,” introduce an instrumentalist who’s not just a natural melodist, but also intensely rhythmic in the Woods manner. She seems to play off the drums, rather than the harmony instrument, making Willie Jones III her Elvin.

Jin clearly thinks in terms of song, and the third track (with Sabeth Pérez guesting on vocals) is cleverly paired with a neat, but by no means routine, shakedown of “Night And Day,” just to confirm that she’s well-studied in the Broadway tradition as well as bop. Luke Sellick consistently impresses on these early tracks as well. He’s one of those bassists whose musicality and metrical efficiency seem in perfect balance. He comes to the fore more than once with sweetly telling fills. But it’s Jones who really gets the leader moving on a Woods tribute and on “Seminole Trail,” a tune that’s going to be called for many times over the years.

This isn’t just a confident—or, God forbid, “promising”—start. It has presence and finish and power.