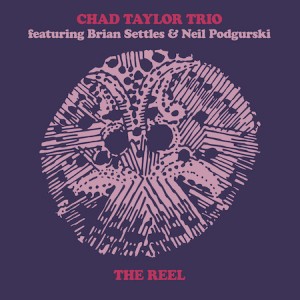 Drummer Chad Taylor’s move to bandleader two years ago with his Chad Taylor Trio’s debut The Daily Biological (Cuneiform) was natural, as he’d racked up a long list of credits as a sideman, from Chicago Underground to Exploding Star Orchestra and beyond.

This new project, The Reel, recorded this past summer, finds Taylor and his band — with saxophonist Brian Settles and pianist Neil Podgurski — even tighter as a unit. The album showcases noteworthy interplay among the musicians and compositions from all three, as well as renditions of two songs by the late pianist and composer Andrew Hill. The familiarity with which the trio plays is no accident, as they initially met as students during their time together at The New School in New York in the mid-’90s.

As a leader of his own trio, Taylor straddles genres with ease. On the opener, Hill’s “Subterfuge,” Taylor sets a bossa nova groove as Settles and Podgurski trade stellar solos. On “Reconciliation,” also by Hill, the trio unpacks the tune’s twisty theme before exploring it with measured confidence.

With four contributions out of the album’s nine tracks, Podgurski wrote the bulk of the material here. His compositions range from sublimely multilayered (“Delta”) to propulsive sets of changes that invite improvisation (“Nebula”). Settles’ “Moon Tone Shift,” by contrast, starts off quietly meditative with cyclical chord changes and then builds to a crashing climax.

Taylor’s two songs for his own trio are, not surprisingly, very rhythmic, and here they sound like they may be having the most fun. “Julian’s Groove” is appealingly joyous but never overwhelming, while “The Reel” is a fitting title track, as its melodic resolution feels like the album’s center. DB