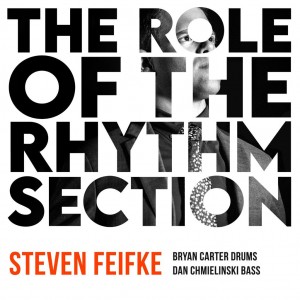 Steven Feifke is pretty darn good at the piano and arranging (particularly with his big band), and he thinks Dan Chmielinski and Bryan Carter are pretty darn good at the bass and drums, respectively. So, he’s made a piano-bass-drums album of seven standards and one original composition (the penultimate tune, “Sunrise In Harlem”) to show just how much he appreciates them. And for yet another of this sort of “hearkening the classics” album, it’s also pretty darn good.

His solo approach to “Tea For Two” is playful and concise; at moments, he laughs like he’s marveling at how it’s coming out of his fingers.

Its transition into the Thelonious Monk tune “I Mean You” with the rest of the trio is a perfect fit, like a drop-in that the band would take advantage of as a break during the live set. He plays this same trick with his own composition, “Sunrise In Harlem” — a sweet, contemplative piece that’s easy to get lost in — before ending the album with a rousing take on Romberg and Hammerstein’s “Softly, As In A Morning Sunrise.”

For this trio, which functions as the core of Feifke’s big band, highlighting these standards is a literal communication of the role of the rhythm section. Using these pieces as examples of these players is an argument for their particular prowess as much as it is about their overall function.