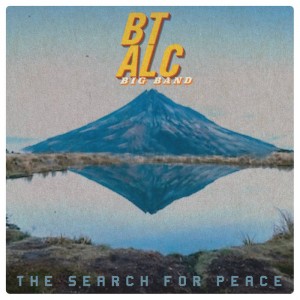 Co-led by trombonist Brian Thomas and trumpeter Alex Lee-Clark, the 19-piece BT ALC Big Band succeeds in funking up one of the most storied traditions in jazz. The Boston-based big band’s fourth album, The Search For Peace, reflects an artistic debt to funk icon James Brown, the bandleader’s danceable rhythms and potent horn charts being key influences on the program’s seven original compositions (three by Thomas and four by Lee-Clark). This 43-minute album offers plenty of barn burners that could fill a dance floor; just the first 30 seconds of Lee-Clark’s “Dance” should get listeners bobbing their heads and shaking their hips.

The catchy “Tune For Lou” sounds like the lost theme song from a 1970s sitcom and features a greasy organ solo from Sam Gilman, nodding to the soul-jazz organ tradition. “Live 9” begins with a beat influenced by reggae before moving into soul and funk territory. “Make It Your Job,” a Thomas tune, is driven by kinetic trombone work and a canyon-deep groove. And the title track subtly samples a recording of President John F. Kennedy’s June 10, 1963, commencement address at American University in Washington, D.C., in which he said that the United States would “do our part to build a world of peace where the weak are safe and the strong are just. We are not helpless before that task or hopeless of its success. Confident and unafraid, we labor on—not toward a strategy of annihilation but toward a strategy of peace.”

Apparently Thomas and Lee-Clark, who are both educators, wanted to inject a short history lesson into the musical proceedings.

Boston-area fans can catch the BT ALC Big Band at Sally O’Brien’s in Somerville, Massachusetts, on July 25, Aug. 29 and Sept. 26.