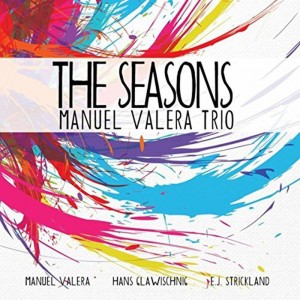 Thanks to his ongoing association with the Irakere-influenced New Cuban Express, there’s been a tendency to weigh Cuban pianist Manuel Valera’s playing by the measure of Irakere founder Chucho Valdés. But that’s an unfair standard on two levels. First, Valera’s playing has none of the playful virtuosity that marks Valdés’ pianism. More significantly, where Valdés is fond of toying knowingly with a tune, Valera seems more interested in seeing where the music’s possibilities will lead him.

That’s particularly the case with this trio, which includes New Cuban Express bassist Hans Glawishnig, and E.J. Strickland, who works with Valera in the Afro-Cuban funk band Groove Square.

The Seasons is the trio’s second album, and the music here is more ambitious and better modulated than on 2015’s Live At Firehouse 12. Valera’s reach is most obvious in the four-part title suite, which finds him evoking spring, summer, fall and winter through motifs owing more to his homeland than to Vivaldi, but he balances that with a striking selection of pop covers. Their reading of Leonard Cohen’s “Hallelujah” emphasizes its hymn-like grace without descending into triviality, while “In My Life” manages to find funk in Lennon and McCartney’s chords.

But it’s “What Is This Thing Called Love” that most amazes, with Valera following its at- chord harmony to the edge of dissonance while Glawishnig and Strickland turn free time into a wondrously controlled rubato. It’s always fun to hear a standard given such non-standard treatment.