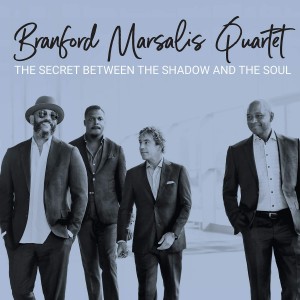 Branford Marsalis never has sounded better on tenor and soprano saxophones, as revealed on this new release by his stellar working quartet with pianist Joey Calderazzo, bassist Eric Revis and drummer Justin Faulkner.

The Secret Between The Shadow And The Soul—the group’s first release since 2016’s Upward Spiral (OKeh/Marsalis Music) with guest Kurt Elling and first purely instrumental effort since 2012’s Four MFs Playin’ Tunes (Marsalis Music)—succeeds in its relentless pursuit of musical sophistication, cohesiveness and inclusiveness. Clearly, these long-loyal bandmates have reached a new plateau together. Marsalis, always a strong storyteller, plays with tremendous conviction and deftly manipulates his sound palette to conjure a range of emotions on the seven tracks here, which include fresh compositions by Marsalis, Revis and Calderazzo, as well as creative interpretations of Andrew Hill’s “Snake Hip Waltz” and Keith Jarrett’s “The Windup.”

Whether winding through the quirky three-bar phrases of Hill’s piece or navigating the elegant radiance of Calderazzo’s “Cianna,” the abrupt perspective-shifts of Revis’ “Dance Of The Evil Toys” or the gentle flow of Marsalis’ “Life Filtering From The Water Flowers,” the quartet stands as a model of adventurousness and commitment. Under Marsalis’ direction, their approach to writing and improvising emphasizes melody and rhythm first, with harmony playing a less-defining role on any given piece. The resulting music drives hard and holds little back as it traverses the many moods this quartet has at its command, even during the more reflective moments on The Secret Between The Shadow And The Soul.