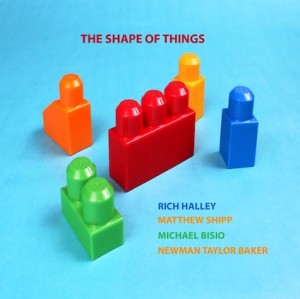 The Shape Of Things is a fountain of pure jazz energy that surges with pulsar-like power.

But first, a bit about the session’s leader, Oregon-based tenor saxophonist Rich Halley. Known for his fiery improvisations and muscular chops, Halley is an unsung yet well-established West Coast artist with a contagious spirit of adventure and a long musical track record that dates back to the mid-’60s Chicago blues and avant-garde scene. His 23rd album as a leader, and his second quartet recording with pianist Matthew Shipp, bassist Michael Bisio and drummer Newman Taylor Baker, The Shape Of Things is a purely improvised affair that takes an anything’s-possible approach to basic concepts of physical dimension, proportion and structure.

Over the course of six tracks with titles like “Vector,” “Spaces Between” and “Oblique Angles,” Halley shows himself to be a master of motivic development who has developed a titanic, distinct voice on his instrument. Whether ripping through the sonic tapestry with note-blurring lines of expertly controlled squawk à la Albert Ayler, coaxing out resonant subtones like a latter-day Coleman Hawkins or singing through long, sustained, vibrato-laden notes in the manner of Pharoah Sanders, Halley never lets up the intensity. The saxophonist’s bandmates are right there with him at every turn, offering plenty of bold statements of their own. Shipp thunders with authority, using dissonant clusters to punctuate the group’s collective interplay and spinning out super-fast two-handed lines that fascinate the ear. His contribution to “Lower Strata” is substantial, his signature left-hand power magnified via liberal use of the sustain pedal as he plumbs the sonic depths of the piano. Bisio is featured prominently on “Curved Horizon,” his solo a feat of chops and endurance that’ll leave you wondering how on earth he does it. The Shape Of Things is one big chain-reaction, a wild ride whose core essence can be best described as geometry in motion.