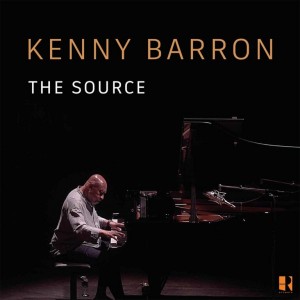 The Source is Kenny Barron’s first solo album to be released since his landmark 1981 recording Kenny Barron At The Piano (Xanadu). Like that initial, auspicious solo outing, The Source consists of Barron-penned originals (“What If,” “Dolores Street,” “Sunshower,” “Phantoms”), Thelonious Monk tunes (“Téo,” “Well You Needn’t”), Duke Ellington/Billy Strayhorn compositions (“Isfahan,” “Daydream”) and one standard from the Great American Songbook (“I’m Confessin’”). And, just like its predecessor of 40 years, The Source serves as a direct emotional connection between Barron and the listener, abandoning all sense of pretense and serving as a fountain of honest, intimate gestures that unfold organically, one right into the next; there are no canned goods for sale here, and nothing forced. The music draws from a seemingly bottomless well of stylistic perspectives under Barron’s command — including straightahead jazz, swinging standards, canonic classical music, barrelhouse blues, bossa nova and free improv — revealing exactly why the 79-year-old DownBeat Hall of Famer has long been esteemed as a master of his craft who thrives in any setting, whether playing solo, leading a trio or accompanying a featured artist. Barron’s every statement on The Source is expressed with uttermost elegance and virtuosity. The album could alternatively be titled Kenny Barron: All The Things You Are, as the NEA Jazz Master crafts a loving ode to jazz and its closest relatives using all the source materials that have made him who he truly is.