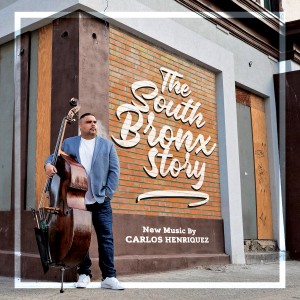 Bronx-born novelist Jerome Charyn has a line that might help here: “Stillborn love notes provide small satisfaction.” Carlos Henriquez, who launched on the scene half a decade ago with The Bronx Pyramid, has delivered a full-on love letter, the kind that stands at the foot of your stairs and yells its passion up at you. Charyn saw his Bronx as a place of “monstrosities” and petty hoodlums. The new Bronx is a meeting place of boisterous tradition and “improvement,” tragedy and optimism, and while the story of Robert Moses and the Cross Bronx Expressway may be of mainly local concern, the music is big, a better word than universal here.

Listening to Henriquez, on this new record, it is harder than ever to avoid comparison with Charles Mingus. The interwoven soneo on “Moses On The Cross,” the passionate evocation of activist “Mama Lorraine” Montenegro, co-founder of United Bronx Parents, and of Cornell “Black Benji” Benjamin who tried to forge peace among the Bronx gangs: These merge into a complex composite portrait of the district, a place coming alive in music and singing its poignant, defiant songs. Henriquez had shown his grasp of idiom in his tribute Dizzy Con Clave, but here he takes a step beyond homage and into large-scale composition, Mingus-like in reach and barely contained energy, brimming with the humor that the other great bassist sometimes hid too far from sight. As the opening track asserts, this is people music, human and humane, flawed only in the sense that we all are, never the same music twice. Walk these streets with Henriquez and his crew. It’s a trip.