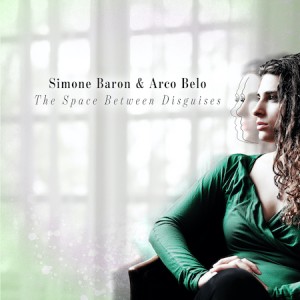 As longtime readers know, the motto that appears on the cover of DownBeat is “Jazz, Blues & Beyond.” The phrase includes that third word as an umbrella term, which applies to music that isn’t easy to categorize. “Beyond” is similar to “world music”: Both terms are intentionally broad, and both could be used to describe the work of pianist/accordionist Simone Baron, who recently released The Space Between Disguises, the debut album by her band Arco Belo. In the album’s liner notes, Baron describes her work, writing, “I thank you for joining me and my genre-queer ensemble as we dance in the spaces between jazz, chamber music, and folk tunes from around the globe.”

This is music that might appeal to, say, fans of banjoist Béla Fleck’s collaborations with bassist Edgar Meyer and tabla player Zakir Hussain, or perhaps Meyer’s genre-fluid work with cellist Yo-Yo Ma.

The album’s centerpiece is the 12-minute “Passive Puppeteer,” which feels like a suite due to its dramatic pauses and intriguing section breaks. This musical journey finds the leader delivering memorable piano lines, as well as improvised runs on the accordion. Pope pumps up the proceedings with his electric bass work, and there are touches of the avant-garde that never descend into the harshly dissonant.

The program consists mainly of Baron’s original compositions, and although she generally doesn’t traffic in deep, repetitious grooves, the music has an inviting, accessible quality that will appeal to many big-eared listeners. Toward the end of the program is a trio of works that allow Baron to flex her muscles as an arranger, as she transforms jazz pianist Walter Bishop Jr.’s “Those Who Chant” (a tune he recorded on 1978’s Cubicle) into a piece that has a flavor akin to Aaron Copland’s work. That tune is followed by the bandleader’s arrangement of pianist/accordionist Tibor Fittel’s “Valsa,” parts of which are so lovely and gentle they could be slotted into the score of an animated Disney movie.

Baron’s creative aesthetic is illustrated nicely by “Buciumeana/Kadynja,” which merges Béla Bartok’s reading of a Romanian folk tune with a traditional melody of Moldovan origin. Overall, listeners who seek to explore far-flung musical vistas might want to stamp their passport for a border-hopping trip with Arco Belo.