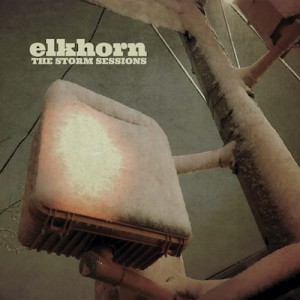 (Beyond Beyond Is Beyond)

The guitar duo Elkhorn, which is joined by multi-instrumentalist Turner Williams on its fifth studio outing, always has aimed to balance the folksy ideal of American Primitive guitar with the agency of ’60s psych stunners.

Despite inevitable John Fahey references, the band’s carved out a corner of the psych world whose audience seems up for a very specific strain of improvisation. And while Elkhorn is meditating on a theme across its discography, the band seemingly has more to excavate on The Storm Sessions.

The album—split into “Electric One” and “Electric Two,” each with parts designated “A” through “C”—finds the band holed up in a Harlem apartment during a winter storm. The slow build of “Electric Two,” as opposed to the more pastoral opening half of The Storm Sessions, benefits from Williams’ shahi baaja (a sort of electric Indian zither with keys added to it). Contributing to the insistent tension, he pushes Jesse Sheppard on 12-string acoustic and Drew Gardner on standard electric into racy exclamations.

But none of this really has anything to do with “soulful cosmic jazz,” as a press release would lead listeners to believe. Instead, it’s the impromptu jamming of three friends who all have the chops to match their varied tastes—a rangy collection of folk, blues, rock and improv.

“We don’t do pastiche,” Gardner told DownBeat last year about Elkhorn’s previous recording, Sun Cycle/Elk Jam (Feeding Tube). “We just have certain things we like and we respond to emotionally. And our way of getting a unique sound is based on just trying to play the most sincere thing that we can think of.”

It’s an admirable pursuit, one that’s yielded music worth tossing on whether you’re stuck inside this winter or just need some enthusiastic reinvestigations of psych-indebted guitar moves.