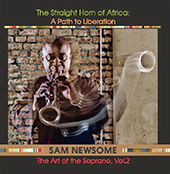 Soprano saxophonist Sam Newsome has been on a path to liberation for years, most notably with his solo albums Blue Soliloquy (2010) and The Art Of The Soprano, Vol. 1 (2012). Now, with The Straight Horn Of Africa: A Path To Liberation, Newsome has truly freed himself, and his instrument, from traditional roles and expectations. Newsome has not only discovered a continuum that exists between Western harmony, Eastern music and the avant-garde; he has also unlocked the straight horn’s potential for extended techniques in a manner that brings to mind the groundbreaking work of virtuoso soprano sax visionaries such as the great Steve Lacy (1934–2004). Newsome’s music evokes ancient peoples and places, revealing the African origins of jazz and popular music—a connection often overshadowed by those genres’ deep-seated reliance on Western harmony. He pulls out all of the stops on the soprano, employing multiphonics, microtonality, slap-tonguing, circular breathing, vocalizations, talking drum-like key thumps and physical movement to create his melodies, rhythms and harmonies. Some tracks are layered via studio multitracking, with interlocking grooves and cyclical ostinatos pushing the simple themes along. Others are solo explorations that increase in complexity over the course of the album, ultimately yielding otherworldly sounding results. The sounds that Newsome seeks, and ultimately finds, are ones that date back to periods long before jazz existed but that informed its origins and consequent development. You won’t hear any direct references to straightahead repertoire here: This is naked soprano sax devoid of modern concepts—a pure voice achieved by an absolute master of the instrument. It’s extremely difficult to produce such palatable and emotionally stirring art by pushing an instrument so far beyond its traditional limits, but Newsome has refined his unconventional techniques to the point of creating a modern masterpiece. The Straight Horn Of Africa (which Newsome has subtitled The Art Of The Soprano, Vol. 2) will entrance you. Be prepared to shed any preconceived notions of the soprano saxophone and to let Newsome insightfully upend your understanding of how all the music styles of the world are interrelated.