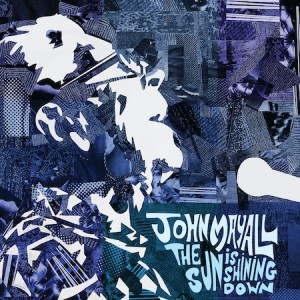 British bluesman John Mayall has been a major force in the genre going back decades. As is legend, talent he fostered was handed off to huge classic rock acts like Cream, the Rolling Stones and more. What’s remarkable is that the guitarist, singer and songwriter has kept at it, with a discography that stretches into dozens of albums. Next month he returns with The Sun Is Shining Down, which finds Mayall teaming up with a stellar cast to deliver an impressively honest, flat-out blues album. As usual, he has some expertly selected talent on hand, including The Heartbreakers’ Mike Campbell, roots rocker Marcus King, Americana artist Buddy Miller, Scarlet Rivera (famously a member of Bob Dylan’s Rolling Thunder Revue), Chicago blues guitarist Melvin Taylor and Hawaiian ukulele artist Jake Shimabukuro. The project was recorded at The Doors’ Robby Krieger’s Horse Latitudes studio with Grammy-nominated producer Eric Corne. Right out of the gate, Mayall sounds energized on “Hungry And Ready,” with Taylor proving a perfect fit on lead guitar. You really wouldn’t think this guy is 88 years old. His voice is still strong but even better is his harmonica playing. On that instrument, he’s still on par with Paul Butterfield, another canny bandleader, yet one who left us more than 30 years ago. Elsewhere here, on the fittingly titled “A Quitter Never Wins,” Mayall, for once, goes at it with no special guest, putting his harmonica front and center from the top before essaying the end of a relationship. On “Deep Blue Sea,” Rivera’s fiddle playing is just as festive and rousing as ever — she clearly hasn’t lost a step, either. The whole thing wraps up with “The Sun Is Shining,” a medium-tempo number showcasing some expertly subtle lead guitar from Carolyn Wonderland.