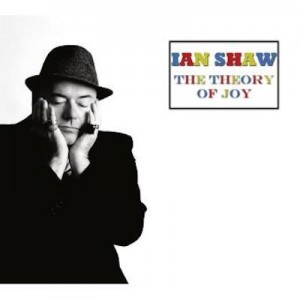 In addition to being a jazz singer, Ian Shaw is a pianist, stand up comic, record producer and radio host. He’s won the BBC’s Best Male Jazz Vocalist award twice and is known in Britain for one-man shows that blend comedy and his own off-the-wall compositions. On Theory Of Joy he leaves the majority of the keyboard work to Barry Green, a frequent collaborator, to concentrate on producing warm, winning versions of jazz, pop and rock tunes, including three of his own.

Shaw provides a scatted intro to “Small Day Tomorrow,” the Bob Dorough / Fran Landesman composition that opens the album on a jaunty note. Green’s frisky piano and the nimble rhythms of Dave Ohm’s drums and Mick Hutton’s bass complement Shaw’s carefree vocal, as he celebrates the mindless joys of a night on the town.

When he sings, “we can swing till broad daylight/ I got a small day tomorrow …,” Green takes it as a cue for a bright, witty solo. The Blossom Dearie hit “You Fascinate Me So” gets an intimate reading. Shaw croons the subtly salacious lyric with a smile in his voice, while the trio hovers in the background supplying minimal melodic accents that keep the energy simmering.

Shaw’s originals are as solid the covers. “My Brother” is a portrait of a sibling who was always willing to put aside his own needs when the family needed help. Green’s stately piano and the measured rhythms of Hutton’s bass and Ohm’s minimal snare support Shaw’s restrained, conversational vocal as he describes his brother stepping in to support the family after his father’s death.

“All This And Betty Too,” a tribute to Betty Carter and young love, is a cheery jolt of bebop, featuring impressive solos from Green, Ohm and Hutton, who supplies a propulsive double-time bass line throughout. Shaw scats and jives, playing with the lyrics by breaking up words into bright bursts of syllables, bringing a sax-like phrasing to his vocals.

David Bowie’s ode to mortality “Where Are We Now?” benefits from Green’s somber left-hand chords and Hutton’s measured bass line. Shaw takes it slower than Bowie’s funereal pace, opening up the vowels like a horn player to squeeze every drop of dread out of the grim lyrics.

He adds a few falsetto flourishes to the last lines, to close with a suggestion of sunshine. Shaw’s take on “If You Go Away/Ne Me Quitte Pas,” combines Rod Mckuen’s English lyrics with Jacques Brel’s more desolate original. Green’s brittle piano cuts like shards of shattered glass, as Shaw whispers the lyrics of the first verse with a desperate passion. He takes a lighter tone when he sings, “But if you stay …,”—the hopeful verse McKuen added to his translation, before plunging back into Brel’s original in French, bringing the song, and the album, to a wrenching finale.

The Theory of Joy: Small Day Tomorrow; You Fascinate Me So; In France They Kiss On Main Street; Where Are We Now?; Everything; How Do You Keep The Music Playing?; You’re Got To Pick A Pocket Or Two; My Brother; All This And Betty Too; Somewhere Toward Love; The Low Spark Of High Heeled Boys; If You Go Away/ Ne Me Quitte Pas. (61:39)
Personnel: Ian Shaw, vocals, piano; Barry Green, piano; Mick Hutton, bass; Dave Ohm, drums.
Ordering Info: jazzvillagemusic.com