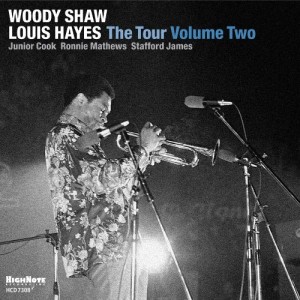 Trumpeter Woody Shaw and drummer Louis Hayes will be forever linked in the collective consciousness of jazz fans. That’s largely a product of the duo’s prolific and incendiary partnership in the 1970s, when they created some of their most explosive work. Some previously unreleased music from this period has been brought to light via the terrific archeological work of HighNote Records. In June, the label released The Tour, Volume One, chronicling a 1976 concert in Stuttgart, Germany. Volume Two is a compilation of live performances recorded in 1976–’77 on that same European tour. This was a transitional period for jazz, with the sounds and structures of hard-bop steadily giving way to the machinations of fusion. Shaw and Hayes thrived in this liminal zone, incorporating elements from both sides of the jazz threshold into a style all their own. The playing here is urgent and unpredictable, with melodic statements that levitate with confidence and solos that burrow deep into harmonic geology. Shaw, in particular, maintains an unremitting energy throughout this disc. He transforms the Jerome Kern standard “All The Things You Are” into a platform for rhythmic tension-bearing and harmonic experimentation, and he injects “’Round Midnight” with refreshing grit and swagger, casting the typically heavyhearted melody into a statement of sureness and poise. Tenor saxophonist Junior Cook is similarly combustible and focused, turning his solo on “Night In Tunisia” into a showcase for whiplash patterns and soaring altissimo notes. But this compilation isn’t all about velocity. Hayes, acting as the band’s throttle, is malleable in his approach, burning hot and bright on uptempo tunes like “Invitation” and dialing down to a gauzy, brushed lull on the ballad “What’s New.” The flexibility of his drumming is what holds this hurtling vehicle together. But despite the intensity, the ride is a scenic one. Unlike the series’ first disc, the variety of performances on Volume Two adds a sense of narrative depth to proceedings, painting the ensemble in a shifting yet constantly gratifying light.