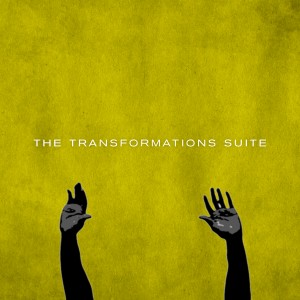 The Transformations Suite is a mix of theatrical poetry and jazz, played with the utmost passion and intensity. Envisioned by composer-director-pianist Samora Pinderhughes, funded via Kickstarter and brought to life with the help of flutist Elena Pinderhughes (Samora’s sister) and others, the album is broken up into five movements and six tracks that run for nearly an hour.

This work, which began while Pinderhughes was attending Juilliard in 2011, is here to soundtrack a revolution, and if Pinderhughes succeeds in one thing, it is creating a work of art that matches the intensity of these trou-bled times better than any Twitter hashtag or Facebook debate ever could. At times challenging, it is nonetheless a powerful work of art.

He eases into it. The opening title track begins with Pinderhughes’ pleasant piano playing. Before long, Jehbreal Muhammad Jackson is crooning, repeatedly, “Give us justice now,” a mission statement for the work.

Powerfully, saxophonist Lucas Pino follows suit as he delivers a robust solo that exclaims a similar message. at power comes to a rapid boil during “Momentum, Pt. 2” amidst claims that “we have got to change America” and screams of “now!”

The decompression follows with “Ascension,” complete with lyrics from the spir- itual “Swing Low, Sweet Chariot.” It’s the most straightforward jazz moment on the album, but not without a detour into dramatic poetry that asks us to “give our thoughts wings, wrap us tight in rings of resistance, and let us fly.”