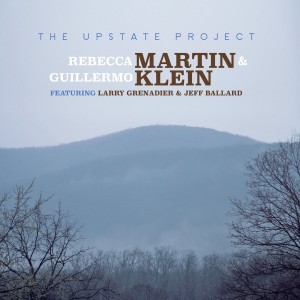 Jazz-folk singer, songwriter and guitarist Rebecca Martin has known Argentinian pianist, vocalist and composer Guillermo Klein since they met at New York’s Smalls Jazz Club in the early 1990s. She admired his work with his band, Los Guachos, a group that blended jazz with the folk music of South America, while pursuing her own career as a solo artist on six beautiful albums.

After years of playing abroad, Klein settled in upstate New York, close to Martin. They began writing together and, with the help of bassist Larry Grenadier and drummer Jeff Ballard, put together The Upstate Project. The band rides quiet, slow-moving grooves into despondent landscapes, full of people that seem haunted by their shattered pasts and fearful of a future that might never arrive.

Martin’s discreet vocal style brims with compassionate resignation. It’s the perfect vehicle for conveying the profound sadness that pervades most of the songs on the record. Klein’s keyboard work is just as subtle. And the stellar support of Grenadier’s shadowy, apprehensive bass lines and Ballard’s subliminal, off-kilter accents add a glimmer of light to these emotionally distressing tunes.

The Upstate Project: Just As In Spring; To Make The Most Of Today; On A Sunday Morning; Thrones And Believers; Later On They’ll Know; When Things Like These Go Wrong; Freedom Run; Like Every Other Day; Outside It Rains For Them; In The Nick Of Time; Hold On; To Up And Go. (49:48)
Personnel: Rebecca Martin, guitar, vocals; Guillermo Klein, piano, keyboards, vocals; Larry Grenadier, bass; Jeff Ballard, drums, percussion.