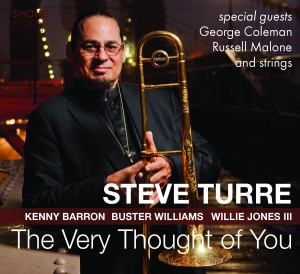 Few artists “own” their instrument to the degree that trombonist Steve Turre does. Whether playing the music of Rahsaan Roland Kirk, performing as a member of the Saturday Night Live house band or with one of his own units, his voice is distinctive and memorable.

Leading a group that includes an eight-piece string ensemble and a couple of guest stars, Turre is way out front for eight ballads and a trio of medium-tempo songs. So, for those who prefer trombone as a side dish, this might be too much of a good thing.

Languorous on the title song—buoyed by the string octet—and gruffly assertive on “September In The Rain,” Turre chooses to cast his work in the mode of a vocalist, focusing on the central melodies of iconic standards like “Danny Boy.” “No Regrets,” a melancholic piece he wrote while in Chico Hamilton’s band during the 1970s, and a newer composition, “Freedom Park, SA,” provide the opportunity to change the script and step into the more familiar role of burly improviser.

Equally burly, tenor saxophonist George Coleman, 83, solos expressively on a richly orchestrated “Never Let Me Go” and an exceptionally sprightly “Yardbird Suite.” Guitarist Russell Malone, no slouch when it comes to balladic improvising, doesn’t fare as well. His brief solo on “September In The Rain” sounds like it was tacked on, and his sound is muted in comparison to Turre’s horn in his other three appearances.

With a stellar rhythm section and material this solid, The Very Thought Of You ought to be more engaging. Instead, it frequently sounds like the concept outreaches the execution.