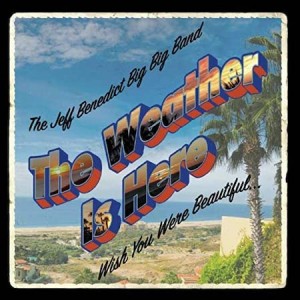 Don’t be misled by the corny title of this stellar big band recording from veteran West Coast saxophonist and educator Jeff Benedict. According to the bandleader, who originally hails from Colorado, it’s just a playful commentary on the more flippant characteristics of Los Angeles culture, where style too often trumps substance. The album is actually inspired by the emotionally evocative and highly accessible music of 1970s Hollywood, when brilliant session players like saxophonist Tom Scott and trumpeter Jerry Hey ruled the studio scene and helped craft moody TV and film scores by legendary composers like Quincy Jones and Pat Williams.

Recorded over two sessions in September 2019, The Weather Is Here, Wish You Were Beautiful is loaded with substance. It’s also rife with risk-taking, thanks to Benedict, who arranged four of his original compositions in addition to several covers for the occasion, and the 16 kindred spirits who bring an abundance of soulfulness, swing and sizzle to his namesake big band. Benedict’s title track is a minor blues featuring tight ensemble passages and strong solo contributions from pianist Jeff Hellmer, trombonist Paul McKee, baritone saxophonist Charlie Richard and tenor saxophonist Jeff Ellwood. Other noteworthy soloists include trumpeter Steve Hawk, who tears it up plunger-style on Jones’ “Hikky Burr,” and guitarist Dave Askren, who takes three joyful rides over the course of 10 tracks.

The saxophone section is prominent on Benedict’s arrangement of Irving Berlin’s “Cheek To Cheek,” derived from Phil Woods’ vibrant interpretation of that standard on his 1977 album Live At The Showboat. On “Tom And Jerry,” a supremely funky piece by Sandy Megas, Benedict channels his hero Scott on alto, while trumpeter Brian Bettger plays the role of Hey in his hard-hitting solo. Benedict’s alto sound often has a juicy tartness to it, as well as a bluesy growl reminiscent of Cannonball Adderley. He offers a more “pure” tone on soprano, and shows a special affinity for sax-section writing with soprano lead—a possible nod to the delicately balanced yet always swinging arrangements of the great Thad Jones.

Covering a multitude of styles, time signatures and song forms, The Weather Is Here, Wish You Were Beautiful is sophisticated, uplifting big band music executed with precision and passion by some of L.A.’s finest jazz soloists and section players.