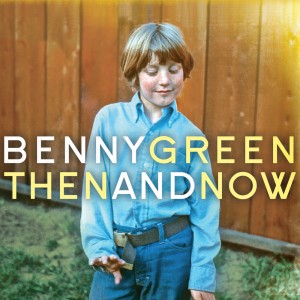 Pianist Benny Green’s 20th album as leader, Then And Now, highlights gems from his decades-long career, as well as fresh directions. Featuring his primary-colored trio with bassist David Wong and drummer Kenny Washington, along with complementary splashes from flutist Anne Drummond and vocalist Veronica Swift, the resulting canvas is more than worthy of his legacy.

The trio bounces through Hank Jones’ “Minor Contention” and moves through muscular turns on Hank Mobley’s “Hipsippy Blues,” as if gravity were an elective. Even the balladry of Duke Pearson’s “Say You’re Mine” reveals a control of fire that only could come from years of performing together.

Swift is a welcome addition to this nexus, shining during solos on Dexter Gordon’s “For Regulars Only,” lending punch to Green’s “Naturally” and slowly heating up the standard “Something I Dreamed Last Night.” Drummond sparkles and shines on Cedar Walton’s “Latin America.” And on Green’s own “Donny Hath A Way,” she emits good vibes to open the set.

As for Green, in addition to his rightly lauded abilities at the keys, his writing is keener than ever. Whether tipping his hat to mentor Walter Davis Jr. on “Humphrey” or making the hard swing of “Wiggin’” feel like the first time, he armors everything with a smile of appreciation for the opportunity to share his art. All the more appropriate that this album should be released on Sunnyside, drenched as it is in the brightest of talents.