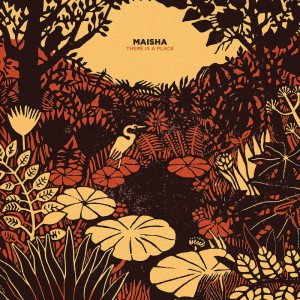 If there’s an essence to London’s jazz scene, some witty and concise way of capturing its appeal, it continues to elude critics and fans. Its musicians draw from a diverse well of influences—Afrobeat to house and far beyond—and freely intermingle on recordings. Currently, the most easily identifiable connective tissue is the unanimous excitement about something new happening, even when something superficially familiar is being played.

Led by drummer Jake Long and featuring saxophonist Nubya Garcia, Maisha’s debut full-length, There Is A Place, clearly self-identifies as spiritual jazz. But it also confidently explores sounds and ideas outside any narrow genre definition. The album opens with the high-energy “Osiris.” Garcia’s bright, spiraling notes mount in intensity before the music abruptly stops, giving the knotty polyrhythms of Long and two other percussionists a moment to shine unaccompanied. On “Eaglehurst/The Palace,” Garcia and guitarist Shirley Tetteh solo consecutively. The distinctiveness of their voices and the steam they generate as soloists elevates the album’s fullest composition. Alongside the album’s namesake closer, it’s one of two moments that feel panoramically epic. The trio of percussionists that gild every track with byzantine rhythmic signatures take a moment to show off here as well.

While a string section sometimes phones in dramatic moments that might’ve been better left understated, and the slower “Azure” feels aimless, the ideas Maisha brings to a familiar framework manage to energize an entry within a well-explored genre.