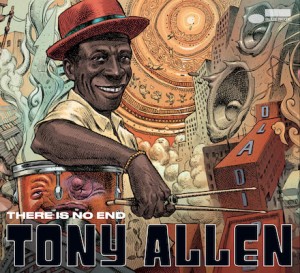 Tony Allen has always been a melder of genres. Thus, it would stand to reason that Allen making a straight-up hip-hop album would happen eventually, even if it was after his death under the shepherding of producers Damon Albarn and Remi Kabaka, who enlisted the talents of assorted rappers and vocalists across the globe to make use of Allen’s beats.

Allen’s beats are truly that, beats — the multifaceted backing tracks from what are a variety of good raps — but that stripped-down nature leaves Allen’s work in the background of an album meant to be his. It’s understandable that when one dies, one cedes the mic, but one wouldn’t expect this to happen so overtly on a work so ostensibly his.

This isn’t to say it doesn’t work, but it’s certainly not what one would expect. It’s not in league with the rest of Allen’s recorded work. It’s so many ideas jumbled together that it sounds more a creation of co-producer Damon Albarn than of Allen. If Allen had more control over his last release by not dying first, one could wonder if this could have had a clearer vision.