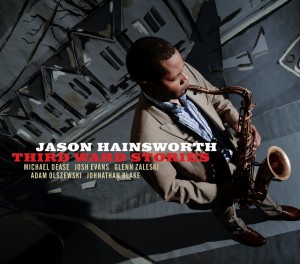 With Third Ward Stories Houston native Jason Hainsworth continues the longstanding tradition of the Texas Tenors, an esteemed group of raw, hard–blowing saxophonists from the Lone Star State who pioneered a robust fusion of swing, bebop, r&b and blues. Among its figureheads are Illinois Jacquet, David “Fathead” Newman, King Curtis, Arnett Cobb and Buddy Tate, and on his latest album, Hainsworth makes himself at home in the sound and spirit of their playing. There’s teeth in his tone as he takes to “Groiditude,” which opens the album with squalls of hard–bop energy, and on “I Plead The Fif,” the saxophonist creates strong harmonic headwinds while drummer Johnathan Blake rages and rattles at the margins. Hainsworth’s style tends toward broad, sweeping statements, and his grammar is highly informed by the hard–boppers and classic swing saxophonists of the mid century, but he can just as easily adopt the elegant vernacular of the best tenor balladeers. On ballads like “Jana” and Hoagy Carmichael’s “The Nearness Of You,” his tone wraps around the shapely melody like smoke, vaporous and potent. And while the album remains centered, geographically, in the heart of Texas, its many allusions point elsewhere. “Barack’s Blues” is a nod to America’s first black president, and this rendition of Wayne Shorter’s “Prince Of Darkness” pays respect to the pioneering saxophonist who composed the song, and to Miles Davis, who adopted the ominous moniker as his own. Hainsworth may have changed his mailing address over the course of his career, stopping for a while in New York and New Orleans, but as is evident from this fine recording, his heart belongs to Houston.