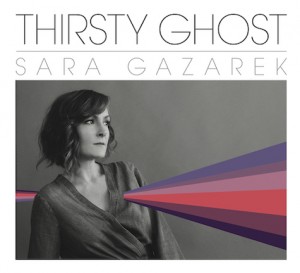 With Thirsty Ghost—her sixth album—vocalist, composer, arranger and producer Sara Gazarek positions herself as an Artist with a capital “A.” Her stature among colleagues is illustrated by the company she keeps: Kurt Elling penned the liner notes essay and contributes vocals to “Distant Storm”; Larry Goldings plays organ on two cuts he wrote with Gazarek (“Easy Love” and “Gaslight District”); and Grammy nominee Alan Ferber wrote horn parts for three tunes.

Gifted with a vocal style that’s both authoritative and accessible, Gazarek soars atop Stu Mindeman’s bubbling Fender Rhodes and Christian Euman’s skittering drums on “Never Will I Marry” and then peppers the proceedings with some slick scatting. The elasticity of Gazarek’s phrasing makes the arrangement of “I Get Along Without You Very Well” a virtual master class in mining an amber song for fresh revelations.

The two aforementioned tunes brilliantly demonstrate the leader’s technical prowess and clear affinity for the Great American Songbook, but it’s the more eclectic fare here that reveals Gazarek’s full artistic range. Her source material comes from various decades and genres: Nick Drake’s “River Man” (1969), Stevie Wonder’s “I Believe (When I Fall In Love It Will Be Forever)” (1972), Dolly Parton’s “Jolene” (1973), Björk’s “Cocoon” (2001) and Sam Smith’s “I’m Not The Only One” (2014). Each of those renditions is stamped with a sleek creativity that distinguishes it from the original version. In Gazarek’s reading of “Jolene,” for example, the narrator is embodied not simply as a victim worthy of pity, but rather a fierce avenger who is not to be crossed.

Thirsty Ghost is the type of album that can transform a career, winning over new fans and causing longtime observers to re-evaluate their estimation of the performer.