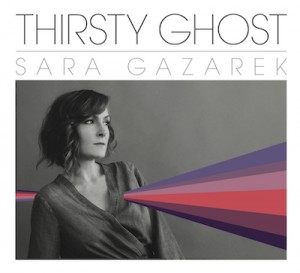 Repertoire isn’t a roadbump for Sara Gazarek. Like a handful of modern vocalists, the Los Angeles-based singer has created a broad book as she’s moved through her seven previous releases. From tunes by Gillian Welch, Laura Mvula and Ben Folds to side projects populated with nods to a couple of key Jameses—Joyce and Taylor—she’s found several works outside the trad-jazz canon to help explain herself. That not only means she’s a modernist, but a valuable part of a singers landscape that includes Becca Stevens, Gretchen Parlato, Dominique Eade and Camila Meza, among others.

On this new album, a record she rightly deems a turning point, Gazarek artfully adds Sam Smith and Björk pieces to her bag of tricks. And she ups the clout of the performances by tweaking her theatrics, clarifying her emotions and investing in a real-life momentousness.

Some of these shifts are the result of a kick from Kurt Elling, an artist known for his intrepid nature. After a decade-and-a-half of Gazarek filling records with pleasant and skillful jazz entertainment, he nudged his pal toward trusting the audience with a more “messy” version of herself; the result is an approach that reflects a human condition wisely dubious of constant rainbows. It works well, shifting the singer from the mildly glib attitude she’d previously adopted to something that feels more authentic.

Gazarek recently endured a near-death incident in her family, a failed marriage, fresh romance and then a meeting with infidelity. This personal turbulence plays out in a suite of tunes that insightfully addresses such emotional unrest. “Gaslight District” portrays the psychological sleight-of-hand used by cheating lovers to bolster their charade. The bouncy “Never Will I Marry” celebrates the self-trust one might find in isolation, and“Not The Only One” shares the ache of being misled. The jaunty swing of “Easy Love” explains how sublime romance can be when firing on all cylinders, and “I Believe (When I Fall In Love)” turns Stevie Wonder’s jewel on its head, dotting its promise with shards of doubt. Her sympathetic band—a piano trio backed by three horn players—enhances each move.

An immersion in Dolly Parton’s “Jolene” presents itself as a dramatic centerpiece. The arrangement swirls, and the music crests and ebbs with the leader’s incisive interpretation of the lyric—pride being subsumed by pleading. The New York Times once said that Garzarek’s voice wasn’t unique enough to “grab your ear or your heart.” Not true. Securing the appropriately mysterious arrangement of Björk’s “Cocoon,” abstracting her vocals to fit the tale of first-blush courtship, trusting understatement to explain her delight—it grabs you quick. Here’s to taking the advice of friends and turning new corners.