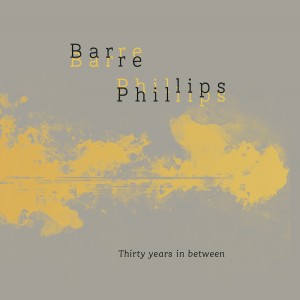 When double bassist Barre Phillips appeared at the 2019 FIMAV festival, he was riding high after releasing his prodigious ECM album End To End. It involved a strong cross-historical resonance, connecting that solo bass album to his 1983 opus, Call Me When You Get There (ECM).

A similar then-and-now backstory energizes Thirty Years In Between, Phillips’ two-disc release on the festival’s Victo label: One disc, Ahoy!, documents Phillips’ powerful and poetic live set from 2019, while the second, Camouflage (solo bass, except for additional electronics on “No Exclusion”), was recorded at Vancouver’s Western Front, in 1989. The sum effect of this double, parallel view confirms that Phillips, now 86, is not only a pioneer in the rare art of solo double bass, but a master of the form.

Textures and hints of internal narrative shift in Phillips’ improvised solo canvases, with apt titles applied after the fact. Camouflage opens with the epic exploration, shifts into the beating tones and half-step kneading of “Covered” and the fittingly named quirk fest of “Twist And Parry.” Ahoy! starts boldly, then leans into microtonal feinting and de-tuning, followed by the wistful arco of “You There, On The Hill,” its searching vibe peering through fog, segueing into the evocative shimmies of “A Quake’s A’ Coming!” The pensive closer “A New Take” implies musical forays to come.

Phillips deploys a range of colors, shifting between pizzicato and arco, using col legno and percussive effects and harmonics. An organic abiding musicality runs through each part, adding to a cohesive whole.

Thirty Years In Between: Disc One: Ahoy!; You There, On The Hill; A Quake’s A’ Coming!; What To Do What To Do; Abate? Arise?; How Long How Long?; A New Take. (47:46) Disc Two: Camouflage; Covered; Twist And Parry; No Exclusion; You And Me; Around Again. (55:12)
Personnel: Barre Phillips, double bass; James Giroudon, Jean-François Estager, electronics (Disc 2, track 4)
Ordering Info: victo.qc.ca