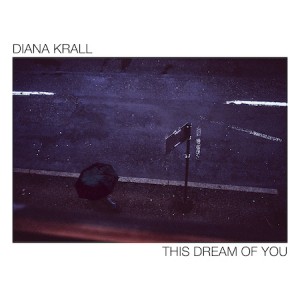 Diana Krall’s This Dream Of You marks a turning point in the singer-pianist’s career: a full-length, self-produced album. These 12 tracks—taken from earlier sessions with Tommy LiPuma (1936–2017), Krall’s dedicated producer since 1995—not only channel the collaborators’ past creative relationship, but further her move in other musical directions.

Unlike most of her previous studio albums, developed with a specific stylistic repertoire and set ensemble configuration, This Dream Of You draws from a variety of previous successes. Krall turns out a comfortably swinging “Almost Like Being In Love” with her regular rhythm section of bassist John Clayton Jr., drummer Jeff Hamilton and guitarist Anthony Wilson. She waxes romantic on “There’s No You,” with her sometimes-duo of bassist Christian McBride and guitarist Russell Malone. And she fronts a shimmering orchestra led by pianist/arranger Alan Broadbent on “But Beautiful.” This is the Krall who sold millions of jazz records and introduced the Great American Songbook to a generation of non-jazz listeners. But she’s always advanced her interests outside of standards and traditional pop. As with her 2015 album Wallflower, she turns to Bob Dylan for this album’s title cut, played as an easeful, country ballad. “There’s a moment when all old things become new again,” Krall sings. “But that moment might have come and gone.” In the face of loss, all that’s left is the dream.

This Dream Of You: But Beautiful; That’s All; Autumn In New York; Almost Like Being In Love; More Than You Know; Just You, Just Me; There’s No You; Don’t Smoke In Bed; This Dream Of You; I Wished On The Moon; How Deep Is The Ocean; Singing In The Rain. (50:42)
Personnel: Diana Krall, piano, vocals; Alan Broadbent, piano, orchestrations; John Clayton Jr., bass; Tony Garnier, bass; Christian McBride, bass; Jeff Hamilton, drums; Karriem Riggins, drums; Russell Malone, guitar; Marc Ribot, guitar; Anthony Wilson, guitar; Stuart Duncan, fiddle; Randall Krall, accordion.