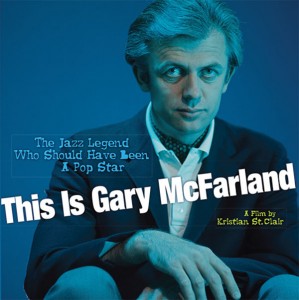 This package memorializes Gary McFarland, one of the busiest New York jazz arrangers of the 1960s. His ascendance coincided with the rise of bossa nova, and McFarland was adept at translating the mercurial song form into orchestrations. He wrote some beautiful orchestral settings for great soloists, yet wasn’t immune to commercial forces.

A DVD of Kristian St. Clair’s recent McFarland documentary and a previously unreleased live CD are potent reminders of McFarland’s gifts. His sudden death from poisoning at age 38 in 1971 robbed music of a composer/arranger who expanded the jazz vocabulary and intelligently addressed the pop music of the day in a way that shortchanged neither.

A late bloomer, McFarland wasn’t serious about music until his twenties. Playing in a band during his Army service, summers at the Lennox School and a cup of coffee at Berklee solidified his passion. He was a synthesist who utilized current trends to inform his style. The structural simplicity and harmonic complexity of bossa nova intrigued him; he reduced the role of saxophones, writing simplified parts that took on translucent beauty when combined. The albums for Stan Getz, Steve Kuhn and Bill Evans still stand as orchestral highlights for those soloists. McFarland’s own America The Beautiful (1968) was a thoughtful response to a country in turmoil.

He was an artist, but McFarland was also a careerist. He used his star quality to his advantage, but signed with a shady manager, who may have dipped into McFarland’s till. Hanging out at Jim & Andy’s with the guys reinforced alcoholic tendencies. One night he took a drink spiked with Methodone, and a decade of momentum was stopped. This film rehabilitates an unjustly forgotten musical legacy.

The accompanying CD is a ’65 radio broadcast from Seattle’s old Penthouse club. McFarland’s vibes lead a small band with reedman Sadao Watanabe, guitarist Gabor Szabo, bassist Eddie Gomez and drummer Joe Cocuzzo. The music is deceptively simple—light-textured, but harmonically layered and gently swinging. Gomez and Cocuzzo supply the flexible rhythm and structure, while the soloists operate with plenty of space.

McFarland and Szabo work particularly well together—accompanying or supplying counterpoint throughout. The inclusion of Beatles tunes must be some of the earliest jazz engagements of that canon. McFarland’s soft vocalese, embroidering his vibraphone cushion, shows that he thought deeply about source material, overlay, space and controlled intensity in his work. One wonders why it’s taken so long to see release.