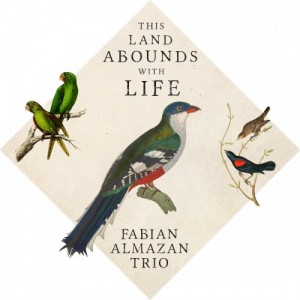 Fabian Almazan’s remarkable piano virtuosity began to draw attention when he joined trumpeter Terence Blanchard’s band in 2007, but surfaced with a striking suddenness around 2011 with his first trio album. It’s a virtuosity that belongs more to a classical temperament then to jazz: Rather than swing spontaneously, Almazan expresses a romantic impressionism that is negotiable on both sides of the divide, wherever that might be.

The 12 selections here were inspired, more or less, by a recent return to his native Cuba, from which he escaped as a child. They are a needlepoint of personal memories, cultural homages and even political allusions—“Benjamin” refers to a character in George Orwell’s Animal Farm—all explained in notes for those who wish to decode the programmatics. But a piece of music is not a narrative. It relies on the abstractions of mood, melody and movement, leaving the listener to infer meaning.

Almazan toys with dynamics much of the time, occasionally in slow, layered climbs; other times, in steep downturns of sweep and tension. The effect is a roller coaster of contrasts in tempo and intensity, played with the fullness of an orchestra. Bassist Linda May Han Oh weaves comfortably into the piano lines, often achieving a careful contrapuntal balance, more than just a solo spot. Their dialogs on “Ella,” “Uncle Tío” and “Folklorism” have a thoughtful equilibrium to them.

But Almazan begins with an uncharacteristic bang. “Benjamin” is a fast, finger-buster of a ride up and down the keyboard. Played in a rolling surge of precise eighth notes, broken every few bars by dissonant speed bumps, it swings with the bracing formality of a fugue.

“The Everglades” is a lagoon of soft, lyric chords, swept by winds and waves in the middle, and ends as a still life. “The Poets” is quietly ruminative with no strong theme, then gathers a percussive weight and force before evaporating.

Where there is a theme, it tends toward simplicity. “Forklorism” seesaws modestly back and forth between two notes, but finds swirling fortissimo power before resolving back into its minimal motif.

The trio is augmented by a string quartet for “Bola De Nieve,” a pre-Castro piece by Carlos Varela. Its chamber intimacy moves from sonata-like grace to broad, arching columns of authority and back again. “Jaula,” an homage to Nelson Mandela, has the lush textures of a piano concerto that conceal its essential simplicity. Finally, after a whopping 85 minutes, Almazan closes with a lovely surprise. “Music On My Mind” by the great Harlem strider Willie “The Lion” Smith conveys an old-fashioned elegance of pure melody that seems at first out of place. But it’s just Almazan’s way of saying he’s a proud Harlem resident.