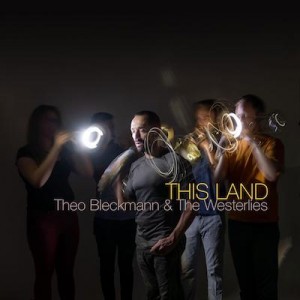 Theo Bleckmann And The Westerlies

On This Land, The Westerlies, an impeccably calibrated brass quartet, continues to stretch our understanding of musical inventiveness. This time, the pair of trumpeters and trombonists join forces with vocalist Theo Bleckmann on a program that alternates between stirring protest songs and soothing palliatives.

Bleckmann transforms Joni Mitchell’s “The Fiddle And The Drum” from a folksy ballad into a harmonically refined duet between voice and horns, and his ominous twist on “Look For The Union Label” alludes to labor disenfranchisement that belied the chirpiness of the 1970s jingle. Then, in segueing from the latter into a dissonant rendition of “Wade In The Water,” the group limns a disturbing correlation between enslavement and persistent social disparities.

In their originals, the group’s message is no less pointed. On “Land,” trombonist Andy Clausen presses for a reckoning with historical wrongs through rhythmic insistence and an accelerating tempo. Similarly, on “Looking Out,” trumpeter Riley Mulherkar’s rueful theme, melodic allusions and spoken-word section recall the horrors of Executive Order 9066, which incarcerated Japanese-Americans during World War II. Around these compositions, the quartet revels in sparkling instrumental renditions of Woody Guthrie tunes like “The Jolly Banker.” Rousing and majestic, these interludes (less than a minute each) hint at the exhilaration of righteous struggle. But “Thoughts And Prayers” plainly asserts the album’s position: “It is time to be the change,” Bleckmann sings.

This Land: The Fiddle And The Drum; Land; Two Good Men; Another Holiday; Tear The Fascists Down; Look For The Union Label; Wade In The Water; The Jolly Banker; Grandmar; In The Sweet By And By/The Preacher And The Slave; I Ain’t Got No Home In This World Anymore; Das Bitten Der Kinder (Recitation); Das Bitten Der Kinder; Looking Out; Thoughts And Prayers. (45:22)
Personnel: Theo Bleckmann, vocals, electronics; Riley Mulherkar, Chloe Rowlands, trumpet; Andy Clausen, Willem de Koch, trombone.