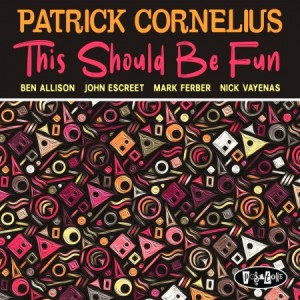 This Should Be Fun, the seventh leader date by alto saxophonist Patrick Cornelius, is a departure from his more recent work. The New York-based bandleader has spent the majority of his recording career navigating a vision of mainstream and modern jazz with a strong bop twist. And his most recent handful of records have been intriguing explorations into thematic works for large ensembles—like 2016’s While We’re Still Young by his octet.

This Should Be Fun finds Cornelius scaling back to a quartet, bolstered on half the tracks by longtime collaborator Nick Vayenas, a trombonist playing hard-bop in the vein of Art Blakey and his Jazz Messengers dating back to the 1950s and ’60s, but updated with a bit more modern harmonic sense. Beyond that, there’s the clear reverence for the bandleader and palpable enjoyment the performers here seem to get from playing these songs, the ensemble’s giddy physicality almost audible in the undeniable bounce and swing of the title track and others like the penultimate “One Shy Of A Dozen.” Even when the mood is less bubbly, there’s still a jovial and noteworthy ease when the band slides into the rolling bop of “Telescope” or the Caribbean undertones of “Restless Willow.” Cornelius’ alto flies not-so-far overhead, sprightly and spirited, but still earthy and full in his preference of the horn’s midrange.

All of this is to say that, yes, the record is fun. But This Should Be Fun almost can’t help coming off that way; an amusing thought-experiment or a playful jam session among friends and colleagues.

It’s clear that Cornelius and company do have fun playing this music, but they don’t go much deeper than that.