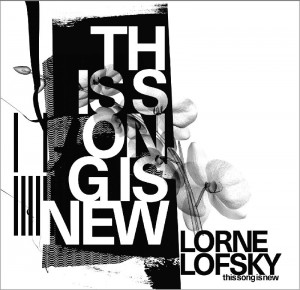 Canadian guitarist Lorne Lofsky, deeply versed in the bebop language and long admired for his straightahead jazz chops, is a sporadic composer by his own admission. After all, he’s been focusing on his playing for the past 40-plus years as a member of other ensembles, most notably the late Canadian pianist Oscar Peterson’s quartet, not to mention his career as one of his country’s leading jazz educators. So, he only composes when an idea comes to him. A recent mini-binge of writing led to the recording of This Song Is New, his first album as a leader in more than 20 years. Sporting a dry, unaffected, no-nonsense tone, Lofsky shares the front line with tenor saxophonist and longtime collaborator Kirk MacDonald over the course of five originals and fresh takes on two standards: “Seven Steps To Heaven” (Miles Davis) and “Stablemates” (Benny Golson). Bassist Kieran Overs and drummer Barry Romberg, who’ve shared stages with Lofsky on numerous occasions over the decades, dig deep into the material, taking full advantage of the ensemble’s interpersonal chemistry and innate sense of trust. Highlights include the title track, which changes keys in deceptive ways; “An Alterior Motif,” a tune whose thematic development relies on altered harmony to guide it; and the hilariously titled “Evans From Lennie,” which reinvents the standard “Pennies From Heaven” while paying tribute to jazz heroes Bill Evans, Lennie Tristano and Lee Konitz — all of whom were famous in jazz circles for imposing interesting new melodic lines upon familiar chord progressions. Nothing feels forced on This Song Is New, which will likely come as a revelation to longtime fans of Lofsky’s masterful technique and exquisite touch.