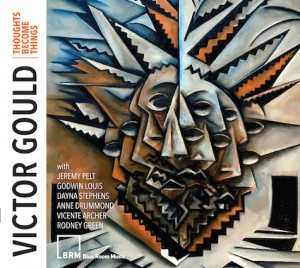 Any player adding a string ensemble to their regular jazz troupe is taking a risk.

Several titans of the genre have given it a shot, and despite Charlie Parker With Strings generating enough acclaim to warrant a 2019 Record Store Day release of alternate takes—nearly 70 years after the sessions—the original album might not be one that many listeners would turn to if, say, Bird And Diz was within arm’s reach.

Pianist Victor Gould doesn’t lean too heavily on the string quartet that crops up on most of the tracks of his third leader date, Thoughts Become Things: On “October,” “What Do We Need,” “Let Go” and “Inheritance,” strings are used for added color to introduce and close out a song or transition between sections. The title track is a notable exception, as reeds and brass are interwoven with a moody quartet.

Tucking in a rendition of “Polka Dots And Moonbeams” adds a bit of historical grandeur to the proceedings. And saxophonist Godwin Louis—who somehow hasn’t become as big a name as the rest of the cohort here—gets a feature on “Karma Jones,” Gould bookending the composition with blocky, resonant chords.