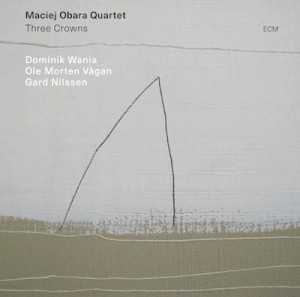 After their 2017 ECM debut, Unloved, Polish saxophonist Maciej Obara and his quartet make their return with Three Crowns. In addition to six new tunes from the bandleader, the album features improvisational renderings of music by one of the most significant composers of the 20th century: Henryk Mikołaj Górecki (1933–2010). Though Górecki’s work has been subjected to improvisational treatments before, these renditions bear special distinction for being sanctioned by his family, whom Obara came to know while living in Katowice, where the composer once was based. The first Górecki interpretation, “Three Pieces In Old Style,” is so beautifully reimagined that it sounds as if it’s emanating from another world. Pianist Dominik Wania opens in a deeply respectful mood, allowing Obara’s incisive tone to keen overhead, while bassist Ole Morten Vågan and drummer Gard Nilssen roam a rain-kissed landscape below.

“Blue Skies For Andy” is among the stronger Obara originals—not only for its melodic strength but also its patience. It has a classic sound that feels warm to the ears, as precise as it is free. Other highlights range from the savvy urbanism of “Smoggy People,” notable for Wania’s postmodern swing, to the more geometric “Glow,” which recalls the tightly knotted compositions of fellow altoist Tim Berne. Obara’s bandmates grow in real time, though nowhere so maturely as on “Mr. S,” an homage to trumpeter Tomasz Stańko that rolls in on a wave of melancholy and sunshine in equal measure. Like the title track, it’s flexible and always attached to something pure and knowable. There is no mystery here. Only life.