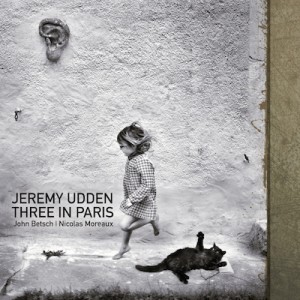 Jeremy Udden is a saxophonist of sterling clarity, imparting an airy translucence on each of his projects, whether the cool polyphony of Hush Point or the pastoral Americana of Plainville. That uncluttered directness is front-and-center on his first trio recording, which celebrates the influence of soprano saxophonist Steve Lacy—with whom the bandleader briefly studied. As the title suggests, Udden recorded the album in Paris with bassist Nicolas Moreaux and long-time Lacy drummer John Betsch. Only four of the album’s 10 pieces are Lacy tunes, but his spirit still presides over the collection. The measured sense of space on a reading of Don Cherry’s “Roland Alphonso,” an homage to the Skatalites’ saxophonist, sets the tone: The vibe is chill but focused, with the rhythm section providing a relaxed platform for the leader’s deeply melodic blowing. Udden’s phrasing is more rounded and plush than his hero’s, and he freely employs explicit bebop runs even when departing from the changes, as on a ravishing duet with Betsch on Lacy’s “Who Needs It?” Udden’s own themes transmit the same sort of spare elegance, and even when interpreting Ellington’s lush “Azure,” the trio achieves a powerful leanness, cutting away all fat and leaving only the most sublime, gut-punching lucidity.