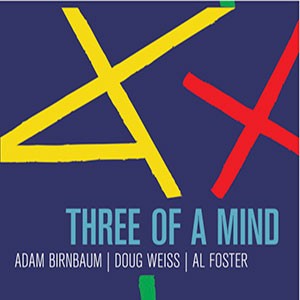 The album title Three Of A Mind nods to the close communication and empathy that pianist Adam Birnbaum has developed over the past six years working in drummer Al Foster’s band alongside bassist Doug Weiss. Birnbaum recruited Weiss and Foster for this superb trio album, which accomplishes the difficult task of sounding diverse yet cohesive. The leader’s seven original compositions are augmented by two of Foster’s tunes: This arrangement of “Brandyn” showcases the fluidity of Birnbaum’s style, while the vibrant conversation between the drummer and the pianist toward the end of “Ooh, What You Do To Me” adds an exciting dynamic to a hummable melody. On “Stutterstep,” Foster develops a percolating energy before injecting potent punctuation into the dialog, delivering solo segments that bolster the composition and never overstay their welcome. “Thirty-Three” features a propulsive, rolling melody, and near the midpoint of this memorable, eight-minute excursion, there’s a bass section that spotlights Weiss’ delightfully melodic sensibility. Birnbaum—the American Pianists Association’s 2004 Cole Porter Fellow in Jazz—is expert in many settings, whether it’s the jaunty, rock-influenced “Binary” or the gentle ballad “Rockport Moon,” featuring Foster’s poignant brushwork. “Dream Song #1: Huffy Henry,” which was inspired by John Berryman’s poetry, illustrates not only the narrative quality of Birnbaum’s music, but also his keen ability to return to a theme at just the right moment.