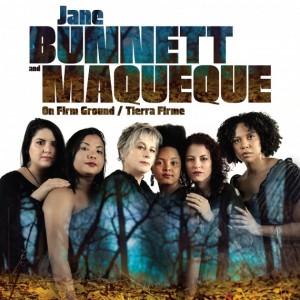 With their previous album, Oddara, Jane Bunnett and Maqueque presented an almost panoramic view of Cuban jazz, with flashes of percussive virtuosity, splashes of chamber music intimacy and regular bursts of vocal uplift. Although there was plenty of room for Bunnett’s rhythmically urgent, emotionally expressive flute and soprano sax, the arrangements took pains to show off the range and versatility of her ensemble. If Cuban music were a big canvas, they were determined to cover it all.

On Firm Ground/Tierra Firme, by contrast, is less interested in framing the richness of Cuban music than in showing off the strengths of Maqueque itself. As well it should. Five years since its inception, the sextet only has gotten stronger, tighter, funkier, and the music on its third album bears the unmistakeable confidence of a band that has found its voice, and is eager to speak with it.

Tracks like “La Linea” and “Habana De Noche” build sweetly melodic structures atop sinuous, richly harmonized grooves, balancing bass and percussion against lush vocal chorales, with the piano and Bunnett’s soprano providing pungent counterpoint. At their best, these tracks sound like a logical progression from the pop-friendly fusion Irakere specialized in.

What ultimately makes Terra Firme ground-shaking are the moments when Bunnett and Maqueque move beyond that template. The lithe, soulful “On Firm Ground” steps beyond the usual boundaries of Cuban jazz, thanks to the searing sacred steel guitar of guest Nikki D. Brown (imagine Robert Randolph with Santana, then square it), while “Broken Heart,” with bassist Tailin Marrero on upright and Brown providing well-placed blue notes, shows an impressive command of balladry.

Elsewhere, “Monkey See Monkey Do” is a lovely bit of social uplift that not only speaks to the potential within, but does so with the sort of blithely inspiring melody that makes its “believe in yourself” message seem almost redundant. Bunnett and Maqueque might sing about being on firm ground, but clearly they’re reaching for the stars.